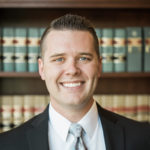 “Being an attorney provides me with a true sense of pride and accomplishment after reaching the best possible outcome on behalf of each and every one of my clients.”

Michael joined our firm after graduating from the University of Washington School of Law in 2016. Prior to pursuing a career in law, Michael graduated with his bachelor's degree from the University of Washington in 2011. In late 2011, Michael joined the United States Army Reserve and attended Officer Candidate School in Fort Benning, Georgia. Michael has continued to serve in the Army Reserve since and has received multiple commendations for distinguished service. Michael focuses his law practice primarily on insurance defense and personal injury, representing both plaintiffs and defendants alike. Representing both sides allows Michael to bring a unique understanding of the challenges his clients face in actions ranging from serious automobile collisions and property damage, to sexual assault and wrongful death. Michael brings strong work ethic, discipline, attention to detail, and punctuality to provide not only effective legal representation, but outstanding communication and an enjoyable attorney-client relationship.

Michael is a member of the Washington State Bar Association and is admitted to practice in Washington Courts.

Michael spends his free time with his three young children and his wife, Kelsey. Together, they enjoy outdoor activities, camping, trips to the beach, and cheering on the Huskies and Seahawks.

Michael was initially drawn to the practice of law out of his love of continuous learning and ability to apply analytical thinking to unique situations. Combined with a desire to work in an individual client-based career where personal relationships are paramount, the practice of law was a perfect fit. Michael desired to follow a career path where his work truly mattered to those he was serving, and for many, there is no more seemingly critical time in one's life than when they are involved in a lawsuit. Being an attorney provides Michael with a true sense of pride and accomplishment after reaching the best possible outcome on behalf of each and every one of his clients.