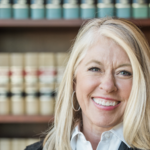 “Common Sense Is Not So Common.”

Shellie is AV rated in the Martindale-Hubbell Attorneys Directory and admitted to practice in both state and federal courts. Named as one of Washington State's Super Lawyers in 2001 by her peers and the editors of Washington Law & Politics magazine, Ms. McGaughey's practice emphasizes insurance defense. Ms. McGaughey is a native of Portland, Oregon and now resides in Bellevue, Washington with her husband and four children. She has been associated with the firm since 1987, and became a partner in 1995.

Shellie is an avid runner and lover of the outdoors.  She has climbed both mount Rainier and Adams and hiked every trail she can find.  Shellie also loves travel, particularly when it involves sun and sand.  In the winter Shellie enjoys snow skiing with her family and in the summer water skiing with her family.  She brings the same drive and competitiveness she has outside the office to her litigation.